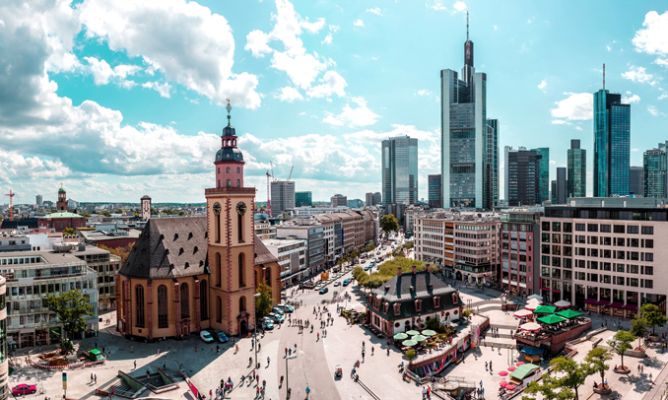 Attention, Mediavine publishers with web traffic coming from Europe: We hope you’re sitting down, because we’ve got some exciting news for you.

No, it’s not GDPR related, we promise.

We mean actual good news — a rarity when it comes to advertising in Europe — in the expansion of the Mediavine Exchange in the EMEA (Europe, the Middle East and Africa) region.

With the launch of our first international data center in Frankfurt, Germany, Mediavine is going international!

We know that sounds cool but probably means nothing to you. Well let’s change that!

Go pour yourself a cold Dunkel and toast to this exciting development I’m about to explain.

What is the Mediavine Exchange?

Over the course of two years, we migrated from client-side header bidding to our own, in-house Server-to-Server OpenRTB solution, the Mediavine Exchange.

This is a big deal.

Mediavine is the only ad management company to have done this; meanwhile, many of the largest publishers in the world remain stuck on client-side.

The short version: Server-side header bidding means that ad auctions, which send ad requests to potentially hundreds of servers, no longer happen on slow phones or other personal devices.

Instead, your phone now sends a single request to the Mediavine Exchange, which in turns makes the requests to those hundreds of servers, returning a single bid to the phone.

The even shorter version: It’s much faster.

When we first announced the Exchange, one of the things we touted was its incredible flexibility. Sure enough, it allowed us to launch the most successful outstream video player ever tied in to 30+ demand sources.

But have you met the Universal Player? Thanks to the Exchange, its performance is unrivaled.

Besides allowing us to plug the Universal Player for the hundredth time, all of this prologue brings us to the latest innovation made possible by the Exchange.

As we said earlier, the Mediavine Exchange is launching its first international data center in Germany. What does that mean and why should you care?

Remember in the previous section, when we discussed all of the phones and computers sending a single request to our server instead of hundreds of servers across the world?

Well, previously with client-side header bidding, we had no control where those requests were going. EMEA users could be sending those requests anywhere in the world – and most likely would end up stateside given the US-centric industry we’re in.

As you can imagine, a phone in the UK sending out a request for a server in the United States takes valuable time.

It might not seem like it these days — humans can make calls or browse sites across the pond with relative ease — but we’re still talking potentially hundreds of milliseconds.

Basically, a delay you might not even notice or care about is an eternity to computers.

Thanks to the control of the Mediavine Exchange, we can now intentionally route where those requests go – by putting a server closer to your readers.

With our new data center, we’re able to cut down those valuable fractions of a second and, as a result, are seeing up to 2-4% more impressions per session in most European countries.

In numbers that matter to publishers, that translates to a 2-4% overall RPM increase.

The results are even more impressive in places like Germany and the UK, where we’re seeing a 4-8% RPM lift.

The crazy part is that this development gets even more exciting. (If you can imagine anything more exciting in life than data centers and nanoseconds saved in bid requests.)

Hold on to your lederhosen and get ready for this one:

Exclusive Demand in Europe and Beyond

While this will surprise exactly no one on the other side of the Atlantic, my fellow Americans may not realize there are different exchanges, including both SSPs (Supply Side Platforms) and Demand Side Platforms (DSPs) in Europe.

Big-name tech giants like Google are ever-present across the world, but there are smaller, lesser-known niche players in Europe who will soon be competing for publishers’ inventory.

The Mediavine Exchange and our Frankfurt data center have greatly increased our ability to add geo-specific ad partners. For example, we have a partner whose inventory performs surprisingly well in Germany, France and throughout much of the continent, but is stuck in the bottom tier of our US partners.

To make a long story short, operating different data centers allows us to optimize the various partners competing in ad auctions in various regions. The European partner in question now can be relegated to the bottom tier — or not even involved — in US auctions while being one of the first bidders in Europe.

Beyond that, this allows us to onboard even more niche partners without concerns about hurting US traffic performance, which is still our most lucrative market.

The Future is Global

The Frankfurt data center is only the beginning for us in the EMEA region, and the region itself is the first of many more we plan to expand into.

More broadly, this serves as proof of our commitment to the entire EMEA region, a long-term vision that began with Mediavine’s IAB and European-certified CMP at a time when much of the internet went dark in large swaths of the continent.

There are 2.2 billion people in the EMEA region and nearly 8 billion worldwide. We recognize that in order to best serve publishers around the world, we need to optimize for more of it.

Using some servers in Germany may not seem groundbreaking, but even the longest of journeys begins with a single step. We’re excited about this first one.

World, we’re coming for you.