Chrome to Block “Resource-Heavy” Ads: What it Means For Publishers

Google announced this week that later this summer, Chrome will begin blocking ads it considers to be “resource-heavy.”

Such advertisements are defined as those that “drain battery life, saturate already strained networks and cost money.”

Examples of ads that may be impacted by this are those that mine cryptocurrency, or are generally poorly optimized.

From an empirical standpoint, here are three red lines that will result in resource-heavy ads blocked by Chrome:

Google will be experimenting with this change over the next few months before rolling it out in earnest this August.

Why is this important?

Google says this new initiative is essential for conservation of users’ batteries and data plans, while providing them with a good experience on the web — goals no one can argue with.

The company says that a mere fraction of a percent of ads served on the web consume a disproportionate share of device resources, including battery and network data.

They’re not wrong. Ads that cross the thresholds listed above represent just 0.3% of ads, yet account for 26% of network data and 28% of CPU usage used by ads.

That’s a lot of wasted data — and likely a noticeably poorer user experience — that can be reclaimed by nixing the most poorly programmed, inefficient or otherwise heavy ads.

As a web page loads, Chrome will limit the amount of resources display ads can use before users interact with it.

If an ad exceeds the limitations, it will error out and inform the user that this ad has used too many resources.

Clicking on details will inform the user about the overuse of resources. Example from Google’s Chromium blog: 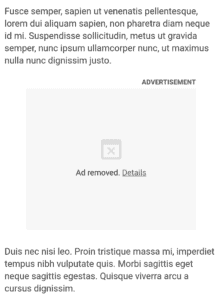 Basically, resource-heavy ads will be stopped in their tracks with an “Ad removed” message appearing for users instead.

On the advertising side, reports will be made available of the ads Chrome offloaded so that they can adjust accordingly.

How will this affect Mediavine publishers?

Very little, and probably for the better. As always, we urge publishers not to panic and to look beyond the headline — a few ads being blocked — to the bigger picture.

Google notes that in developing this strategy, it targeted only “the most egregious” ads — those that consumed more CPU or network bandwidth than 99.9% of all detected ads.

So you’re looking at a tiny percentage of ads impacted, and if those ads are draining users’ resources, chances are there are adverse effects on your website performance.

You want those ads gone, with better ones served instead, preserving pagespeed and users’ experiences alike. This is stopping bad actors, not ad blocking for the sake of it.

Two years ago, Mediavine, along with Google, joined the Coalition for Better Ads, a group that specifies standards for how the industry can improve ads for consumers.

In accordance with CBA guidelines, Chrome already uses a built-in ad blocker to deny all ads (including those owned or served by Google) it deems non-compliant.

Our point is that Chrome ad filtering already occurs on a wide scale, and that while it may sound scary at a glance, it ultimately improves, rather than disrupts, the ecosystem.

Changes aren’t permanent, but change is. A fast-evolving web requires adaptation, and as a company built on innovative technology solutions, we have always risen to that challenge.

Remember: As our top monetization partner, Google has a vested interest not in stopping ads from serving, but improving the web so ads are more efficient and optimized.

That’s what this is all about. That’s what Chrome’s phasing out of third-party cookies and its pagespeed badging indicators are about. A safer, stronger and faster web.

There’s also more than enough runway to fine-tune how this is going to work before it actually goes into effect. Thus the May announcement of an August release.

Over the next three months, our engineers will be working closely with Google, and our other ad partners, to ensure a seamless transition when it goes live in August.