Are Mediavine Ads ADA Compliant? Why You Don’t Need To Worry!

The Americans with Disabilities Act, or ADA, is a hugely important topic at Mediavine these days and on the internet in general.

For good reason. Accessibility is vital to all aspects of society, and it’s finally getting the widespread attention it deserves online.

Our friend Andrew Wilder of NerdPress likes to say, “On a long enough timeline, accessibility becomes important to everyone.”

However, it’s important to realize that some readers may have started off further along on that timeline or are already there.

What does that mean? What does accessibility mean in this context?

If you meet the Mediavine requirements for traffic, there’s a good chance you have visually-impaired or challenged readers.

Not everyone considered impaired is legally blind, but a large portion of the population — especially among older demographics — are visually challenged enough that it matters.

According to the Centers for Disease Control and Prevention, more than 3 million Americans, or 3.4% of the population, are either legally blind or visually impaired.

Put another way, being visually impaired means someone might have a diminished ability to read that isn’t fixable by usual means, such as glasses.

It’s a wide spectrum, but it’s important to consider all affected readers — both legally blind and those with poor or declining vision — when designing and writing an ADA compliant website.

And accessibility doesn’t just mean addressing vision concerns. Hearing-impaired readers are equally vital to web audiences and are protected under the ADA as well.

According to the World Health Organization, more than 5% of the world’s population has disabling hearing loss and, among older groups, that already-striking amount can be significantly higher. 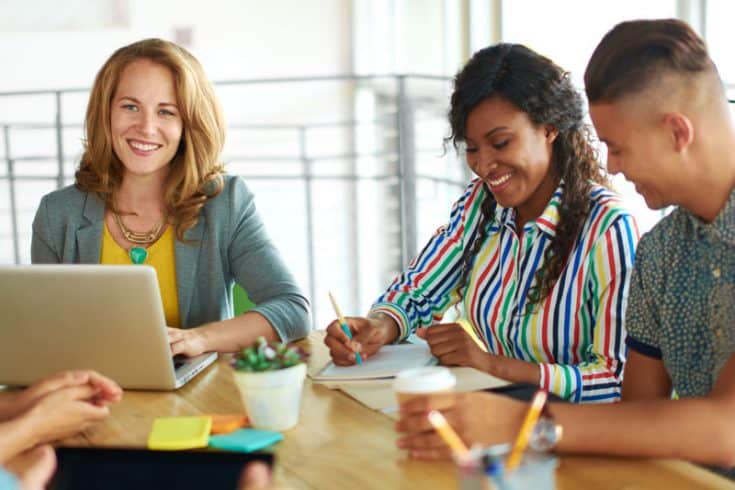 The ADA and Web Accessibility

The Americans with Disabilities Act, or ADA, is a U.S. civil rights law which prohibits discrimination against individuals with disabilities, such as visual impairment.

Recently, a few U.S. publishers have been named in lawsuits that cite the ADA, and there’s been a big movement to make sure all Mediavine websites are ADA compliant.

While I wish this wasn’t the impetus behind publishers making their websites more accessible to the visually impaired, it’s undoubtedly another strong motivator.

Not worried about being sued? Okay, but you should still make your site accessible anyway, and not only for your readers, though the handful who are struggling visually will appreciate it.

It’s not much of a leap to say that accessibility is a ranking factor at Google. In fact, it’s directly stated in their SEO starter guide, which recommends setting alt text for every image.

Even if you aren’t worried about being sued or declining search traffic, well, how about more money? Stop alienating any percentage of your audience and you’ll reap the benefits.

Remember, Mediavine ads are lazy loaded, so unless a user scrolls to the bottom of a page, ads won’t be served — and the odds of impaired readers hanging around non-accessible sites are zero.

So many good motivators. Now that you’re on board, let’s get to the point.

We can’t guarantee anything in a court of law if your website is named in any sort of action. This is not meant to be legal advice, and since we aren’t your website’s owner, we aren’t ultimately responsible for its content.

However, Mediavine develops everything with accessibility in mind.

A major factor when considering ADA compliance is the effectiveness of a screen reader — a form of technology that renders text and image content as speech or Braille output.

Screen readers are essential to people who are blind, not to mention visually impaired (as we mentioned above), or even those who may be illiterate or have a learning disability.

It’s important to remember that there are a lot more people with disabilities than you think, and to do everything you can to make websites accessible to them via assistive technologies.

Again, this responsibility lies with individual publishers and not Mediavine. However, you can rest assured that all Mediavine products should properly output labels for screen readers.

For example, we made certain that our adhesion unit’s close button meets Google’s accessibility requirements for touch target area, as well as a proper aria label.

Every control inside of the Mediavine video player is properly labeled as well. In fact, we recently released the ability to upload closed captioning files for hearing impaired readers.

Even with Trellis, we integrated Lighthouse into our development cycle, which runs accessibility audits on every code change and ensures elements have things like proper alt attributes and aria screen labels.

From a content standpoint, we’ve published guides to increasing font size and increasing line height – both considerations which impact accessibility and publishers can tackle easily and quickly.

(These steps also help improve SEO and earnings, so seriously, do it.)

The actual advertisements themselves? Here, it gets a little technical. We don’t have control over what happens inside the ads, but the ads themselves are served inside of an iframe.

We make sure we label every iframe with an appropriate title, such as “third party ad content.”

Try it out with a screen reader and you’ll find that the screen reader will properly inform you that you’re leaving the main window and are now looking at “third party ad content.”

Once they enter that third party advertisement with their screen reader, they’re going to an external site and it goes beyond Mediavine or the publisher’s control.

That’s the nature of iframes and third-party programmatic advertising, where literally millions of different ads could serve to users from the open marketplace.

We have done, and will continue to do everything in our power to properly label all website elements for screen readers and ensure a robust experience for impaired audiences.

Those happy audiences — along with Google’s approval and making the most out of your earnings — are worth it. Please don’t hesitate to reach out to us if you have any questions.