We’re excited to announce some exciting changes to the loyalty program at Mediavine, which began in 2016 as a way to reward and thank the publishers that helped get us to where we are.

Unfortunately, our system – designed around similar loyalty-type programs that essentially provide a cash-back reward at the end of the year — proved more complicated than expected.

Another negative aspect we noticed was that some publishers felt “trapped” while waiting for their anniversary and its accompanying loyalty bonus. That was never our intention.

We’re trying to reward, not trap publishers. If you’re unhappy with Mediavine, we want to make that right, not hold something like that over your head.

From this point forward, your loyalty bonus will be added to your revenue share each day, at the rate you’ve accrued over time. No more waiting. 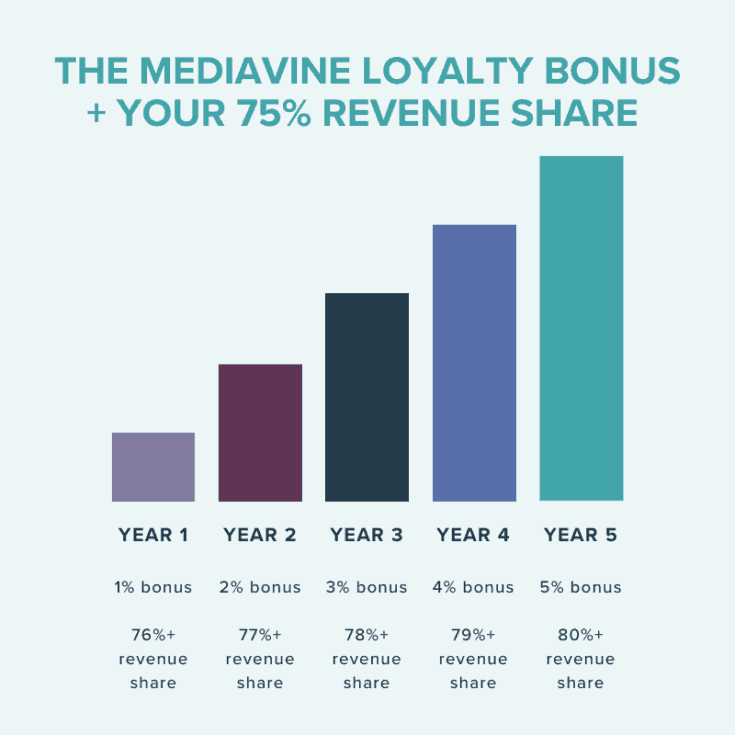 At the end of your first year with Mediavine, that’s an additional 1% of your annual earnings. After your second anniversary, it’s 2%, and so on. At your fifth anniversary, the loyalty bonus will reach — and be capped at — a maximum of 5%.

To make a long story short, the loyalty bonus is now part of your revenue share. All active publishers now start off at a minimum of 76%, with the opportunity to earn up to 90% with impression-based goals.

Again, the loyalty bonus will be paid as part of your revenue share every day you’re with Mediavine. It will simply appear as increased revenue, 365 days a year.

All outstanding, owed loyalty bonuses under the old system will be paid effective yesterday and reflected in the dashboard for active publishers.

Thank you all so much for making Mediavine the largest collection of exclusively managed content creators ever assembled. It’s unbelievable what we’ve all accomplished so far, and we look forward to even greater success together in the future.

Please enjoy this small token of our appreciation!